As leaves turn and campaign season signals colorful change ahead, politicians at the local, state and national levels debate what works in education programs designed to improve academic outcomes for America’s children.

And while both sides have our kids’ best interests at heart, most of what they’re debating is theory, spinning off educated guesses about the success or failure of ideas with little short-term application on the blackboard or the blacktop. 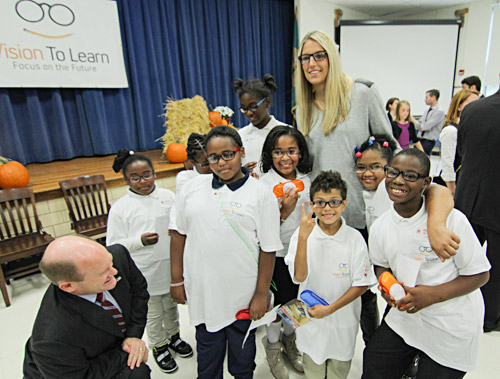 Something very different is happening in Delaware.

Right now in the First State, local, state and federal officials are joining with the private sector to bring a technology into classrooms that is guaranteed to improve academic outcomes as soon as it is applied.

The reasons why are clear. In the United States today, 80 percent of learning comes from a student’s ability to read a textbook, a computer screen or to copy notes from a blackboard. Yet 1 million students across the country currently lack the glasses they need to do one or all of those things. It’s a growing problem.

In New York City, a screening of four intermediate schools showed 28 percent of students had vision of 20/40 or worse, making it impossible for them to read the blackboard.

In California, 95 percent of first-graders with impaired vision began the school year without the glasses they need.

In America today, 60 percent of students in need of vision care are labeled “problem learners.” Most come from low-income, minority families.

But bringing a 13th century invention into classrooms can change these statistics — and these kids’ lives — for the better.

The proof can be found in California.

In 2012, the Beutner Family Foundation formed Vision To Learn, a non-profit designed to bring vision care to students in schools across Los Angeles.

After commissioning original research of area Los Angeles elementary schools, the organization identified the reality that parents and teachers don’t always notice when a student needs glasses. If they do, sometimes parents can’t take time off from work to bring their child to the eye doctor. And while most of the students needing vision care are eligible for Medicaid, sometimes the health care system itself is just too daunting.

The answer? Bring the doctors — and the glasses — to the students for free.

Which is what Vision To Learn did, staffing mobile eye clinics that traveled to public and parochial schools in low-income communities throughout Los Angeles.

The doctors screened each student. Those needing glasses got them with the frames of their choosing.

Today, Vision To Learn’s mobile eye clinics have visited nearly 400 sites across California and distributed nearly 20,000 free pairs of eyeglasses. A University of California, Los Angeles study of the program shows an 8 percent improvement in math scores among young boys after just one year of vision care.

While this success was funded with private donations, imagine what a private-public partnership can do.

In Delaware, we intend to find out, as Vision To Learn will partner with Medicaid providers, private donors, schools and families to deliver the program to 6,000 low income, mostly minority students in the state.

Working together, we were able to negotiate with Medicaid providers to include reimbursements to mobile eye clinics, making the program sustainable so students get vision care every year.

We believe this model will work in Delaware — but America’s kids deserve that it work across the nation.

We think it can.

Vision services for low-income children have been provided for under Medicaid for years. What has been missing is access to those services. Today, we have an opportunity for every state to ensure that mobile eye clinics, similar to those used in California, are reimbursed under Medicaid, too.

Turning that opportunity into reality will demand leadership from colleagues in the Senate and House, in state and local government, in city halls and in businesses across America. Together, we can ensure that our kids get the help they deserve so that they can compete in class, on the court, and in life.

Being a kid means not having to care about legislative calendars, ironing out policy disagreements or leveling balance sheets. That’s our job. So let’s do it, applying existing laws to give America’s kids a clearer shot at a great future.

Sen. Chris Coons is a Democrat from Delaware. Austin Beutner is the founder of Vision To Learn.