Over 600,000 students and their families will benefit from the partnership, Griffin and Clippers chairman Steve Ballmer announced today. 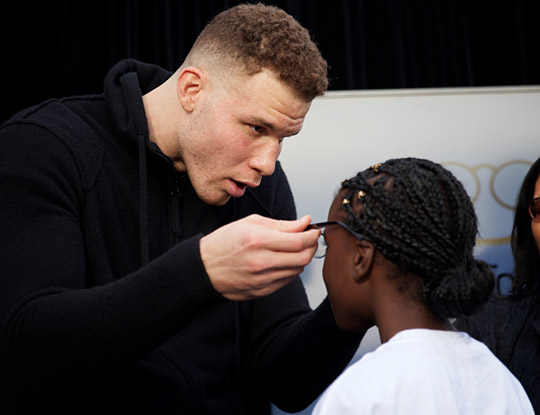 Blake Griffin and the L.A. Clippers Foundation have partnered with non-profit Vision To Learn and LAUSD to provide free eye exams and glasses to every Los Angeles Unified School District (LAUSD) student in need throughout the district. Out of over 600,000 LAUSD students, an estimated 15 to 20 percent need glasses. Over the next two years, every student K-12th grade in LAUSD who needs an eye exam and glasses will get them, free of charge, thanks to the generous support of the L.A. Clippers Foundation, Blake Griffin, and LAUSD.

Ninety-five percent of first graders who need glasses don’t have them, in part because their families are low-income and have difficulty accessing affordable vision care. Eighty percent of all learning during a child’s first 12 years is visual, making a pair of glasses a critical educational tool. The Clippers and Griffin are teaming with Vision To Learn to solve that problem for LAUSD students because it will help children succeed in school as well as in life.

Griffin’s older brother, Taylor, struggled with poor vision as a child and Griffin explained what that meant to him and his family.

“I remember going with him to the eye doctor for the first time, and the doctor was surprised how bad his vision was,” Griffin said. “I also remember being jealous of my brother because he got to have these cool glasses and I didn’t. But that was such a huge thing, realizing that he couldn’t see that well until he got glasses.

“The sheer number of kids we’ll reach with this program, it’s unbelievable,” Griffin added. “To be able to take care of that many kids and have an impact that widespread is a lot of fun for us and it’s meaningful.”

“We are helping to address the vision problem for the students of LAUSD for one reason: it is the L.A. Clippers Foundation’s goal to make a positive difference for children in Los Angeles. This is what we do, and there is no better way to do it than by working with a strong, proven community leader like Vision To Learn to help kids. When you can see the chalk board, or the computer screen, or the math book – you’ve got a shot at learning. For kids with eyesight issues, Vision To Learn can change the scope of their entire lives,” said Clippers Chairman Steve Ballmer.

“I’m so proud that the Clippers are able to make a lasting impact on over 600,000 Los Angeles children, the future of our city, and to do it alongside Blake Griffin.”

“With the support of Blake Griffin and the L.A. Clippers Foundation, LAUSD will become the largest school district in the nation to provide glasses for every child who needs them, free of charge,” said Vision To Learn Founder and Chairman Austin Beutner. “Providing glasses to students helps them succeed in school, and in life.”

Improving a student’s vision has profound benefits on his or her educational and life outcomes. A study of Vision To Learn’s program by researchers at UCLA’s Mattel Children’s Hospital found that providing a student with glasses boosts his or her math and reading grades, and improves the learning environment for the entire classroom and school. Correcting a student’s vision leads to better behavior in class, better relationships with family members and classmates, and a better approach to life as a whole.

The kids tell the story best:

“I wish I could have glasses so that it would be clear to see the board and read and write things, and play sports,” said Miranda Morales, a fifth grader at Lovelia P. Flournoy Elementary School in South Los Angeles who received her very first pair of glasses today from Griffin.

The L.A. Clippers and Vision To Learn held an event this afternoon at Flournoy Elementary with Griffin, Ballmer, Beutner, and LAUSD Board Chair Monica Garcia tipping off the initiative.

“The Los Angeles Unified School District is proud to work with the L.A. Clippers Foundation and Vision To Learn to give all of our students access to comprehensive screenings and eye glasses, to help them reach their fullest potential,” said Garcia.

Eye exams are beginning in all LAUSD schools now, starting with Lovelia P. Flournoy Elementary. The exams will feature Clippers and Blake Griffin-branded mobile clinics and future interactions between the Clippers and the program will include in-arena visits and follow-up school visits with Ballmer, Griffin, and other Clippers personalities.